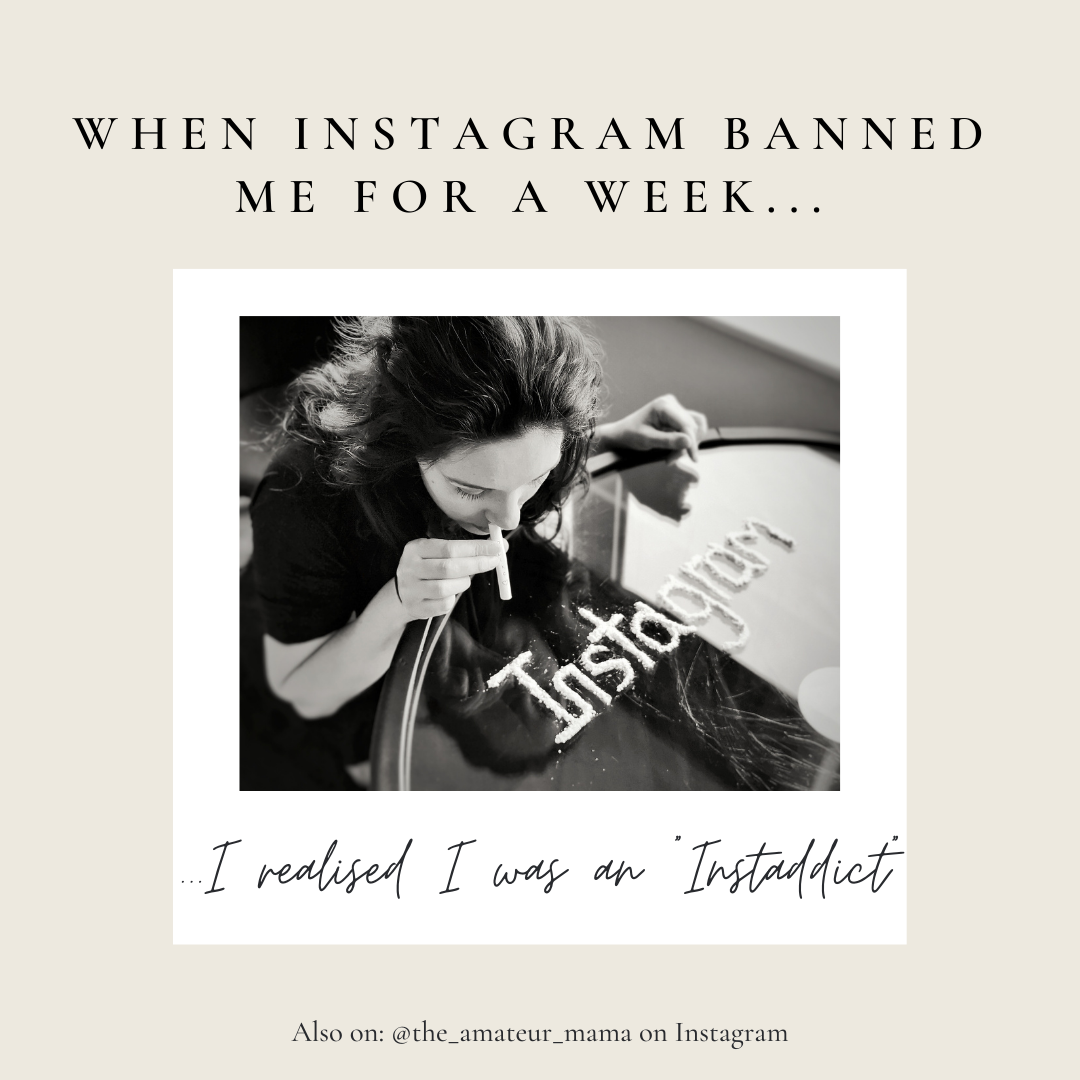 If you’ve arrived here from “Are Instagram Engagement Groups a Good Idea?” then you’ll know exactly how I received a week-long ban on Instagram. If you haven’t, head over there now to get the low-down, and then come back to read on!

I had never considered myself to have an ‘addictive personality’ (if such a thing even exists), and certainly never thought I could get addicted to social media. I am forty years old for goodness sake; people my age don’t get hooked on such new-fangled things; we grew up without mobile phones or computers, so surely we are above the modern dilemmas that afflict the misguided youth of today? Alcohol, fags and chocolate yes, but Instagram likes? Nooooo.

Well no surprises here (thanks to the title of this blog), but I was wrong. And like any other addiction, mine crept up on me without me even realising. Also like any other addiction, I had convinced myself it was not an addiction without even having considered that it might be. Believe it or not, I had justified the compulsion to spend most of my day glued to my Instagram account by calling it ‘my job‘. Ok, some people really do earn a proper living out of being an Instagrammer, but I am most definitely not one of them (yet). However, because I was diligently trying to give Instagram a go as a potential revenue stream, I was able to fool myself into believing that I was ‘dedicated and determined’, rather than out and out addicted.

Eventually, the only thing that made me realise that I was in fact, well and truly hooked, was the week-long ban that Instagram gave me, about eight months after I had embarked on the engagement-gathering journey which culminated in what quite clearly became an obsession. Although never explicitly stated, the ban was 99.9% likely to have been served as a punishment for all the ‘illegal’ engagement activity I was indulging in through engagement groups and hashtags. Again, if you’ve read “Are Instagram Engagement Groups a Good Idea?”, then you’ll know that I had built up an all-consuming habit of what’s known as ‘contrived’ or ‘reciprocal’ engagement’, which had all but taken over my life without me even noticing.

So just how bad had my Instagram engagement habit become, before the ban? By the end, this was a typical day for me:

Now all this, while alarming to read in black and white, could at a push, still be argued away as being necessary work in the early stages of building up an Instagram account, in order to gain traction, get a bigger reach on your posts, and win followers. But without a real plan in place of how I was going to get out of this cycle or switch my account to organic growth (rather than contrived growth) at any specific point in time, all this activity was little more than an addiction or an obsession, with no viable end in sight.

While I’d been told anecdotally that increasing your reach in this way was essential for the Instagram algorithm to pick you up and boost you as a ‘popular’ user (and therefore put your posts on the Explore page, and at the top of people’s feeds), there was no actual proof, and we were all just stabbing in the dark as to how or what was the best way to grow your account and get more genuine, interested followers.

Throughout all of this, I did have a vague notion that it was all starting to get a tad unhealthy. My Insta-workload was overwhelming but compelling, draining but imperative. Rob would joke that I spent all my time glued to my phone. My loose plan was to stop it all when I’d reached 10,000 followers, and I had set a goal to reach 5000 by Christmas 2020 (which I achieved), and 10,000 by the time my second baby was due (early April 2021), and I was hell-bent on getting there. If I needed to do all this ‘work’ to reach it, then I was damn well going to do it!

However, without being forced to stop, was I really going to be able to give up all those likes and comments that I had become so accustomed to? Unlikely, because what I hadn’t realised, was that as opposed to it being purely ‘a job’, I had actually come to totally rely on the constant drip-feed of interaction and approval that all these positive comments and ‘likes’ were giving me, despite the fact that I knew that they were not motivated by the quality of my posts but by —on pain of death— the obligation to reciprocate the engagement they’d received in return! Somehow, although I knew they weren’t entirely genuine, these daily affirmations had become my raison d’être, especially during what was otherwise a lonely groundhog day of a life in the dragging Covid-19 lockdown.

Eventually the choice was taken from me, and Instagram served me my (probably well-deserved) ban. I was unable to post, unable to like, unable to comment. At first I was incredibly annoyed, defeated by the restriction that meant all my ‘progress’ would be paused, if not reversed. But then I started to see it as a welcome relief, a chance to have a breather and not have to sit there, staring at my phone for the best part of every day, liking pictures I didn’t really care about.

I messaged all my groups to let them know what had happened, and then, after a day of still feeling the need to check in and look at my feed and stories, I decided to delete the app from my phone entirely, so that I wouldn’t be tempted to try and like anything, or comment on something on auto-pilot. At first this was motivated by the (again, anecdotal) advice I’d been given that going completely cold turkey would be the safest way to clear my ‘cache’ of bad behaviour and avoid another ban as soon as this one was lifted, but then, once I’d thought about it, I realised deep down that a total break from the app would actually be a good thing for me as well.

And like any addiction, stopping had its withdrawal symptoms. I felt like I’d lost a right arm; the daily chore that filled my time had gone and I had nothing mind-numbing to sit and do for hours on end. The constant ‘well done’ was gone too; there was no one to tell me what I’d written or shot or assembled was ‘great’, no one to agree with my ramblings, and I had to live with real life instead of the make-believe of social media. I found myself wondering if things would fall apart, or whether people would fret about where I was, or if the engagement group I had started myself would descend into chaos. The one solitary week that I was banned seemed to last FOREVER, and I went through a myriad of emotions, ranging from sadness to worry to anger to ambivalence.

As the week went on however, I went from feeling like I’d lost my arm to feeling like I didn’t want it back. The addiction that had developed so quickly seemed to dissipate just as fast, and I realised that I couldn’t actually bear the thought of going back to being a slave to all the obligatory engagement I’d wrapped myself up in once again. When the ban was lifted, I knew what I had to do. I messaged all but three of the groups I was a part of to tell them that I was leaving. And with that, I deleted every single one, and breathed a sigh of relief.

The crazy thing is, we refer to it as ‘just social media’, but it’s anything but ‘just’. It can be all-consuming and overwhelming; more so than real life socialising ever was, and the really surprisingly thing is how fast it can happen. Leaving all those groups didn’t feel like ‘just’ social media; it felt like a massive thing for me to do, and I still wonder sometimes, when I look at the comparatively measly number of likes and comments I now get, if I was right to walk away.

Underneath it all, I know I was, because now I am forced to find ways to grow my engagement organically, which ultimately will lead to a more permanent, genuinely interested audience for my content, and any content I post on behalf of my sponsors. It also means that I am not relying on less-than-genuine approval to feel good about myself, which, let’s face it, is the root of all addictions we face today.

I would love to hear your thoughts on this topic, and whether you too have come to the realisation that you are addicted to the gram! If you like what you’ve read, and would like to keep up to date with the content I post, please subscribe and follow me on Instagram (and yes, I am all too aware of the irony of this call-to-action!).

The Amateur Mama and The Amateur Dad embark on their journey as first-time-parents in their 40's. Join Freya, Rob and their baby son Odhrán as they make their way through the labyrinth that is parenthood.